When you think of the most prolific scorers in NBA history, you think of names like Kareem Abdul-Jabbar, Bill Russell, and Karl Malone. Most casual basketball fans aren't familiar with names like Oscar Robertson, Bob Cousy, or John Stockton, but without these men, the previously mentioned scorers would have been much less effective as an offensive threat. And thus is the life of the Method Interchange vulnerability.

There are other methods for sending parameters to a server (alternate data formats such as XML and JSON, embedded in the structure of the URI as in RESTful services, other parts of an HTTP request such as custom headers), but here we are referring to the traditional methods provided by the HTTP protocol: GET and POST.

Server frameworks will either store parameters in global arrays as they parse the request, or have method calls for pulling parameter data from the request object when needed. For example, PHP stores GET and POST parameters in the $_GET and $_POST global arrays as it parses each request. The $_GET array stores all of the parameters that were sent as part of the URI query string. The $_POST array stores all of the parameters that were sent in the request payload. When a developer expects data from the request payload, he uses the $_POST array to fetch it. When he expects data from the URI query string, he uses the $_GET array. What many security testers forget, or are unaware of, is that PHP, like many frameworks, also has the $_REQUEST array, which holds all parameters and values regardless of whether they were sent in the URI query string or as part of the request payload. It is the use of the $_REQUEST array and similar implementations that allows for Method Interchange.

Below is an abbreviated list of methods and objects from several popular development frameworks that could allow for Method Interchange. With some of these frameworks, this is only one of multiple ways to introduce Method Interchange. And in some cases, vulnerability requires other conditions to exist.

Discovering Method Interchange is incredibly simple. First, identify a request and move the payload from the URI query string to the request payload or vice versa. Keep in mind that POST requests require a Content-Type header to function properly, so add/remove the necessary headers as needed. While this can be done manually, Burp Suite makes this incredibly easy through the "Change request method" context menu option (thanks Mike). 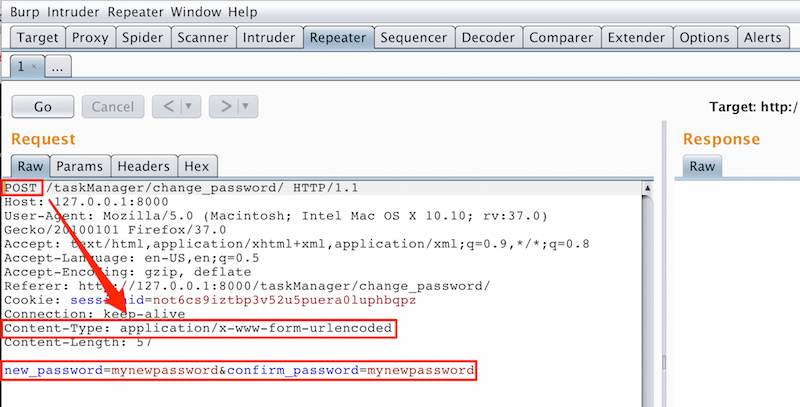 Then, fire off the request and analyze the response. If the response mirrors that of the original request, then the application is vulnerable to Method Interchange.

So where does the assist analogy fit in to all of this? And so what if parameters can be sent in the URI query string or request payload interchangeably? ... Have you ever tried to conduct a Cross-Site Request Forgery (CSRF) attack that leveraged parameters sent in the request payload? How about a Cross-Site Scripting (XSS) attack? Or how about exploiting a Session Fixation vulnerability where the a session variable was sent in the request payload? If Method Interchange exists, then the CSRF and XSS attacks become much simpler, and Session Fixation vulnerabilities may become exploitable.

Exploiting XSS in a POST parameter requires a GET-to-POST script on a 3rd party server, resulting in a suspicious link with which to exploit a user. Exploiting CSRF in a POST parameter requires embedding complex JavaScript into a 3rd party application, also resulting in a suspicious link. Method Interchange allows for a simple URL containing a XSS/CSRF payload to appear as a link to a trusted resource. Exploiting Session Fixation may not be possible when a session is sent via a POST parameter. Method Interchange allows an attacker to fixate a session via a simple URL that appears as a link to a trusted resource.